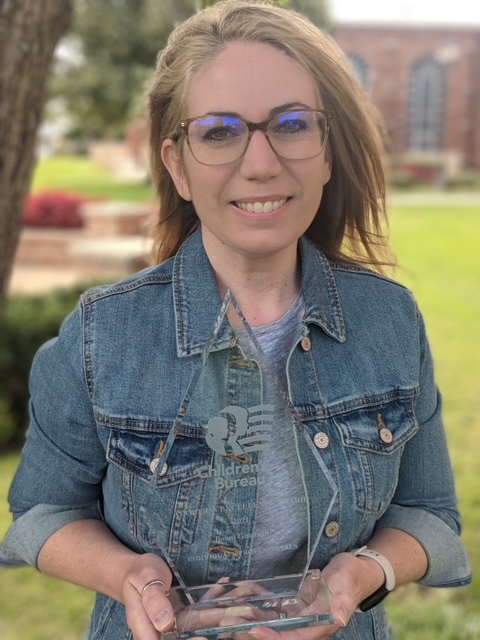 Dr. Bonni Goodwin, a graduate of the GSSW PhD program, was recently selected to receive the 2021 Adoption Excellence Award by the Children’s Bureau for her work and research in adoption.

Dr. Goodwin graduated from Baylor with her PhD in December 2020. Before her time at the GSSW, she was working with an adoption agency in Oklahoma. It was there she realized several ways in which the field of adoption could be improved.

“I went to a conference focused on adoption and heard Dawn Wilson, who is the

executive director of the National Training Initiative (NTI). She was presenting on a grant they had received to be able to create this training on adoption-competent

mental health,” Dr. Goodwin said. “As I was listening to her present, I got really excited about it and thought, ‘man that’s really what Oklahoma needs’.”

Following the presentation, Dr. Goodwin approached Wilson about adding Oklahoma to the list of states to pilot the NTI in the field of adoption. After a few months,

Oklahoma was able to join the program, giving statewide access to training for those involved with the child welfare system as well as mental health providers.

adoption-competent mental health is, created a lot of different trainings, and presented at a lot of conferences. Then as I was working on my PhD I really focused a lot of my research on the importance of adoption competency for mental health providers.”

Throughout her PhD, Dr. Goodwin published articles on the needs and gaps in

awareness for risks of disruption or dissolution from adoption. She said adoption

competency is a large part of the needs across the nation. Between the NTI training and the articles she’s published, Dr. Goodwin is doing her part to fill that need.

“It’s really through that connection, Dawn Wilson. She’s the one who nominated me for the Adoption Excellence Award with the Children’s Bureau. It was mainly through my work with the NTI and the ongoing things that I’ve done with it,” Dr. Goodwin said. “It’s a huge encouragement to keep doing what I’m doing and that I’m on the right track.”

Recently, Dr. Goodwin has taken on two new roles as the statewide coordinator of Adoption Preservation Services with the Oklahoma Department of Human Services as well as a program manager in the Center for Child Welfare Training and Simulation at the University of Oklahoma. She works through these positions to provide training and consultation support on adoption-competent mental health services for child welfare workers and mental health practitioners across Oklahoma.